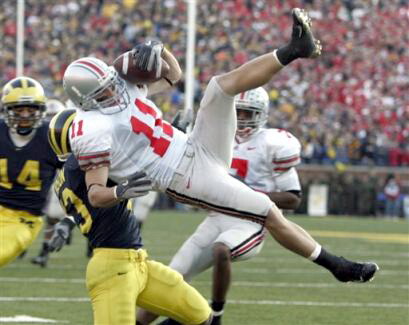 JUST THE FACTS.....Ohio State scored a late touchdown as they came from behind to pull out an "ugly" 25-21 victory over UM. In the course of winning, OSU proved that they were talented enough to win in spite of themselves. Consider this - Michigan played a nearly flawless game as they had only one fumble, zero interceptions, zero missed field goals, and zero missed extra points. On the other side of the field, a talented Ohio State team brought back memories of "Coach John Cooper ball" as they fumbled the ball 4 times, missed an extra point, missed a field goal, shanked an 18 yard punt, were penalized for 35 yards, lost star linebacker Bobby Carpenter on the first play of the game, and found themselves traling by 9 points late in the 4th quarter.

DEFENSE STILL WINS CHAMPIONSHIPS..........So how did OSU win the game? The most telling fact was the reality that Ohio State's defense won the game for them. Michigan only averaged 1.1 yards per run, gaining 27 yards on 24 carries, and they were 0-for-6 on third-down attempts in the second half as the OSU defense held them to a net 245 total yards. So, unlike the Cooper era, Ohio State overcame their mistakes and won it's six game in a row this season by defeating Michigan 25-21 as OSU quarterback Troy Smith brought OSU from behind on their final drive by completing seven of eight passes, including a nice 26-yard pass to Anthony Gonzalez to U-M's 4 with 37 seconds left in the game. That completion basically sealed the win as running back Antonio Pittman later scored on a two yard run with 24 seconds left to clinch the victory. It was a dominating winning drive as OSU never even faced a third down.